Skip to content
has been a year of important life events, of decisions and change, a year of learning and discoveries and it has been a good year!

I learned a new sport. That’s how I started my year, on a ski slope in central Austria, one of my favorite places. I liked skiing from the first moment. I still like it very much. I decided to spend my birthday skiing. It’s been a wonderful 30th birthday  in Winterberg with dear friends, snow, lots of joy and lots of dutch people.

Entre estos dos viajes de esquí, tuve la oportunidad de aprender español en la Universidad Politécnica de Valencia. It was a quick and one of the best decisions of this year. Being in Valencia for one week I learned the language good enough to enable me to order in the restaurant and in the store, to understand news on TV and to talk to the taxi driver. The fact that the taxi driver repeated everything I said, exactly the way I said it, showed me that I was right. When you learn a foreign language, it’s never only about words and grammar, it’s also about understanding the way people from other countries think, how they behave, what they eat and why they have certain eating behavior. That’s why we also had the opportunity to take a cooking class in tapas, which I afterwards practiced in Kassel with my Phase 10 group 😉 And I also learned that many Spanish people have a very strong opinion that German people solo trabajan – no fiesta, no siesta.

Valencia was also one of the 7 new cities I visited this year. Another one on this list was Murau (well, it is a little premature to say that, but I’m gonna go there today, and it still is 2013 ;)), Bratislava, Istanbul, Izmir, Nazilli and Didim. These added to my list make exactly 65 cities I’ve visited in my entire life, without cities in Romania, but including German cities.

The visit to Bratislava brought a also new country on my list of new visited countries, the 16th. 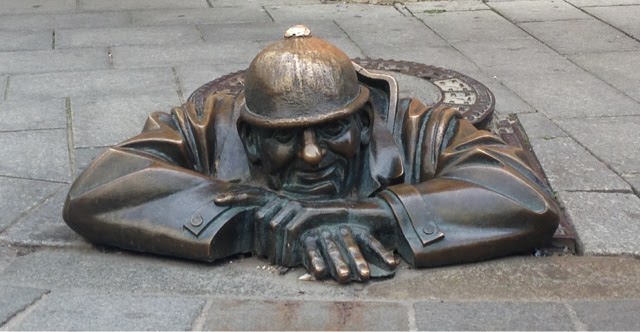 It’s been a short visit to a very close neighboring country, close meaning similar: in history and the time was to short, but my feeling tells me that I would have found much more similarities to my own culture. This country looks pretty similar to Romania, Bratislava could be Cluj, but where I don’t understand a word nor do I recognize the taste of the food. It is totally worth visiting and I am sure, I will go back to experience much more from everything it can offer.

It is pretty obvious that visiting 4 Turkish cities this year, must indicate that it was my first visit of the country. And it is right, country number 17 – checked (even though it is not a contest)!

I had the amazing chance to learn about Turkey which I knew mainly from history lessons in school or from the people I meet at Am Stern in Kassel. The cities I’ve visited were so wonderful, so impressive. There is so much diversity, so much tradition and so much modernism. I felt very comfortable, a little bit like home, but not quite home. Turkish people are very polite, they are helpful and their sense of humor is adorable. But I guess, when you feel very comfortable in one place you tend to call it home. Well, I wouldn’t mind calling it home, since they anyway speak lots of my language and eat all Romanian food.

Ben Türkçe öğrenmeye başladı and I think I decided to learn the most difficult language of all. My goal is to be able to understand and speak with all lovely people from Nazilli when I go back in 2014. I would tell them that sarma is a Romanian dish and it’s very delicious to eat it with polenta and sour cream and that şapcă, făraş and many more words are Romanian as well. And that the Ottomans took them when they were invited to visit our beloved country 😉

I not only discovered this year my Turkish roots, but also rediscovered my Saxon ones at the Transylvanian Saxons’ meeting (Heimattag) in Dinkelsbühl. It takes place every year at pentecost in Dinkelsbühl. 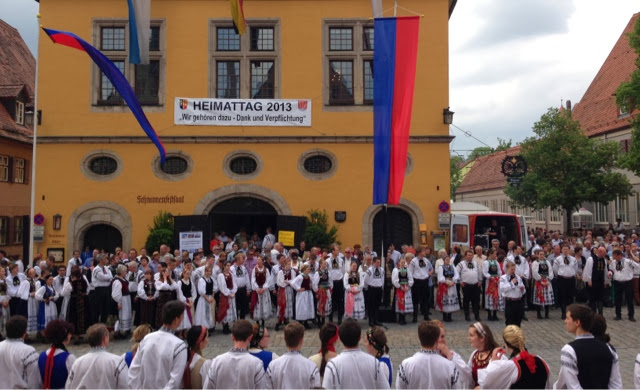 Around 30.000 of over 250.000 Saxons who moved back to Germany in the late 80’s gathered to remember and to revive traditions, which will never be forgotten. Our mother is the Saxon of the family, but we didn’t quite practice back in Romania. I think it is a feeling you develop when you are far from home. Coming together with you country people is a good feeling. We, Alexandra, Marius and I, dressed in traditional costumes met very many people, we didn’t think we would know. We even met the Saxons community from Kassel by chance and the Community of Saxons from the place where we used to live when we were kids.

Staying in touch with our country people was the motto of May. Our dear friend from childhood and his partner have a daughter. We, Alexandra, Marius and I, had the honor to become her God parents. That’s how, this year I became God mother for the third time, but for the first time to a girl, Helena. I am so much looking forward to see her again over new year’s holidays and to celebrate her first birthday mid January.

It feels like I was away for half of the year but I will return now to stories from northern Hessen, because there was so much more happening this year in Kassel…

I went to my first protest in the streets of Kassel, the warning strike of government employees for better working conditions and fair salaries. 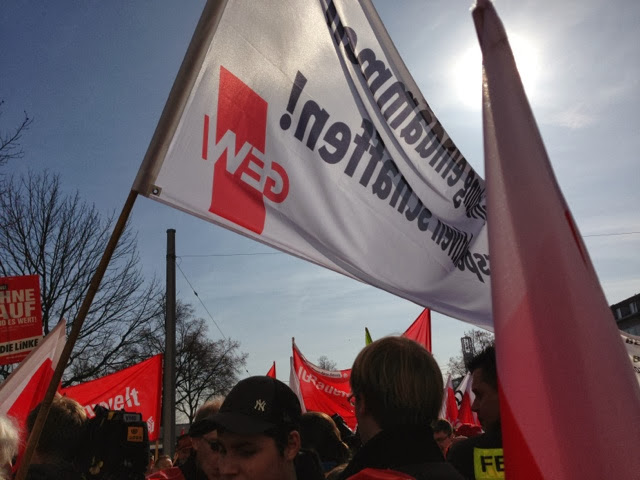 Not that it had anything to do with the strike, but this year was good for work also. I got an extension of my work contract, what I think is a good sign because this is probably the best job I could have. My work is very divers and dynamic. It brings joy to me and to the people I work with, because every day we have the chance to help somebody. We also learn something new, further develop, share ideas and make them happen. This job is never exhausting, it is enriching.

One says that the year will be very much like New Years Eve. If you are happy at New Years Eve, you will be happy the whole year. Well, I remember being happy, but I also started my year with sports. That would probably mean that sports was supposed to be an important part of my life. Now, looking back and connecting the dots, it really was! I like biking and since we have this beautiful bike road along the river Fulda from Kassel to Hann. Münden, I joined the bikers group to travel by bike 57 km from Kassel to Hann. Münden and back in one day – it was so beautiful! And then I also joined the gym sometime June. I enjoy it very much and I feel great!

Despite of the fact that there was no dOCUMENTA, nor did any other unique event take place, I counted 12 visitors, friends and family, who enriched my life this year. I also learned a lot about my city which hosts me for the last 6 years and seems to host me some years longer. My people use to like it in Kassel (probably that’s the reason they come back all the time) and I am always very happy to have them at my place.

We usually have lots of activities, like going to museums, enjoying the green areas in the city and around the city, visiting the neighboring cities, going to parties, markets, having BBQs, meeting friends, cooking, playing or even pimping up my apartment.

Marius, my brother (I must say this, otherwise you will never learn his name), and Alexandra would also say, that I got myself a boat. It was not really mine (yet :D), but I spent lot’s of time on the Uni Kassel Schiff. on Fulda this summer.
With my visitors from August we had quite a different experience. One experience that was so unexpected beautiful, that we had to live it again few weeks later. Glen Hansard had a concert at Kulturzelt Kassel. I won’t talk about this any longer, because I think everybody knows by now everything about it. For all the others my post from August 24th. In November it ws again Glen time at the Crossing Border Festival in Enschede. There was magic and magic reloaded. Their shows are breathtaking, like we’ve never seen before.

The end of November in the Netherlands is also the time when Sinterklaas comes with the boat from Spain. And guess what, I met him in Almelo. 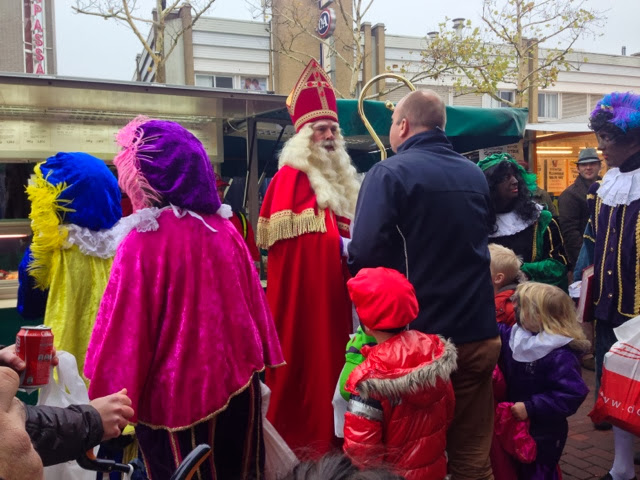 I don’t know if it was Sinterklaas or any other supreme power, but shortly before the year came to an end, a long term wish was fulfilled and I moved to my new apartment, one that I like so much, that I am always looking forward to coming home. Many dear friends helped me moving and I am very thankful for that. Without them neither would my moving have worked out so perfectly nor had my year turned out so great!

I thank you all who enrich my life every day. At this very special time of the year, I hope that every person in this world has a good moment to think of. There is lots of anger and disrespect in the world but also light and hope, and we need to learn to see the light and let hope show us the way.

I wish you all a very special new year. May you have the opportunity to learn a lot, to share your ideas and to believe that something good can happen every day. May your work make a difference and enrich your life and the life of others.