I’m used to the fact that people who visit me in Kassel enjoy their time very much (at least that’s what they tell me) and I am always very happy to have them at my place. I don’t know, it’s something about this place that makes everything perfect. Usually they don’t stay very long, one weekend, maybe one day longer. But this one time was different.
It happened that my recent guests, my friends from the Netherlands, as I use to introduce them, came for the Zissel weekend and … stayed and stayed and stayed for about ten days. So I was like: mi casa es su casa, mi amigos son sus amigos (hope my Spanish lessons were worth it). We had a great time, we visited lots of places, went on boats, celebrated the water sports, made BBQs, went out quite many nights, visited the rivers and woods around Kassel, had lunch with the neighbors… But one activity on the last day was so unexpected beautiful, so beautiful that I wasn’t able to write about it until now.
There is this music event in Kassel. It takes place every summer for 8 weeks in a tent next to the Fulda river. It’s a beautiful atmosphere. We learned from a friend that Glen Hansard, an artist with skin and hair, as the organizers called him, will have a concert at Kulturzelt Kassel on August 11. Glen Hansard in Kassel??? Not for real, right? Yep, it was him! Since we soon also learned that it was AUSVERKAUFT, we thought, ok, we’re not gonna see him live, but we will listen to the concert from the Biergarten outside. When we were very confortable with this plan, what happend on the day of the concert? Tickets still available on site. We rush there 3 hours before the concert starts and are the first in line. We listen to Glen during the sound check and cannot believe it yet, that we will actually see him life.
And there we were, at 19:30 we’re inside the tent, Glen and the Frames come and what happened next was breathtaking, mind blowing, simply amazing!! It was a show like we’ve never seen before. It was a concert like we’ve never been before to. These people are artists one should not miss to see. If you haven’t been to a Glen Hansard concert, you haven’t been to a great concert. 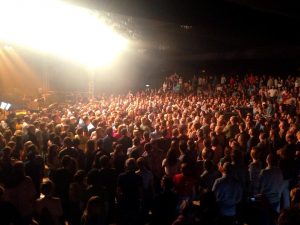 “It was magic” said Rob while signing our CD.

I’m still there and I think I’m not gonna be leaving soon. And if you’d like to have a very tiny small impression on how it was, check out the video below:

By TamoetaAugust 24, 2013UncategorizedLeave a Comment on People always leave…except when they don’t